The Process After Mediation: What Happens Next? Once the mediation process comes to an end, your mediator will issue you with a concluding document that will set out any agreements reached.

You will receive either;

The decisions you reach in mediation are not legally binding on their own, and so you have a number of options as to how you move forward: 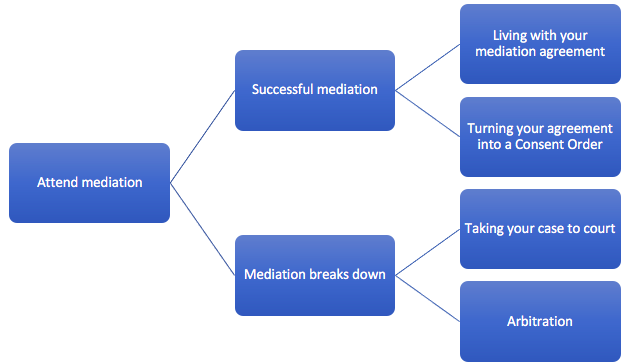 What happens if no agreement is reached?

If the mediation process does not achieve the outcome you had hoped for and you are unable to resolve the dispute, you could either continue your discussions through a solicitor to try and reach an agreement, or your mediator can issue you with a court form to enable you to start court proceedings to have the matter resolved by a judge.

If mediation is only partly successful, it can still help you to narrow the issues that you are asking the judge to consider during court proceedings, thus saving expense and time.

For further information about attending the family court, there is a helpful service run by Cambridge Family Court Help and Information that can provide you with detailed responses to questions about general court information, and the nature of different hearings and appointments.

Turning your agreement into a Consent Order

In order to avoid misunderstandings after a successful mediation outcome, both parties may agree to apply to the court for their mediation agreement to be made into a Consent Order. This will involve starting limited court proceedings; you may wish to do this through a solicitor as the process can be confusing, but it can be done without a solicitor if you prefer.

When you see a solicitor you should take with you any Statement of Outcome, MOU or Mediation Notes that you have received from the mediator. These documents will help your solicitor to convert the mediation agreements into a Consent Order.

Deciding not to get legal approval

While a Consent Order provides both parties with the security of a legally enforceable agreed decision, many people choose not to turn their agreements about child issues into a consent order because they feel that the agreements can be managed between themselves and they can trust one another to adhere to them.

However, most financial agreements between divorcing couples will need to be turned into a consent order in order to be effective and final. For instance, if there is an agreement to share pensions, both parties must have a consent order or the pension company will be unable to divide and share the pension.

It is important to remember that life events may mean that your agreements have to be reviewed at times. You can always return to mediation again in the future in order to renegotiate your arrangements.

If you reach an agreement in mediation about child arrangements, it is not usually necessary to apply for a Consent Order through the court, as the court strongly discourages unnecessary applications about matters that parents should be expected to sort out between them.

The ‘No Order Principle’ set out in the Children Act 1989 states that the court should make no order in children cases unless it considers that making an order would be better for the child than making no order at all. This is because research shows that arrangements made between parents without involving the court are generally less upsetting and stressful for children.

If you wish to avoid going to court, you could explore alternative options such as:

Further challenges after the mediation process

If your situation changes over time, or the arrangements you made previously are not working, you can always return to mediation to renegotiate the original agreement.

If you have made a legally binding agreement and the other party fails to follow it, you could consider whether it might be resolved by returning to mediation, as this is generally quicker and cheaper than returning to court. But if not, then you would need to return to court to enforce the agreement.